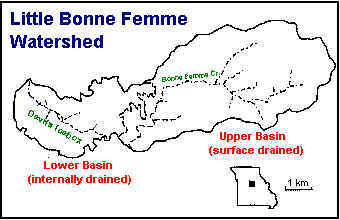 This project is a collaborative research effort of the USDA-Agricultural Research Service, the University of Missouri-Columbia, Missouri Department of Conservation, and the Missouri Department of Natural Resources. Each of these organizations are represented in the Missouri Karst Ecosystem Group (MOKEG) which is an interdisciplinary group of scientists and cave conservationists dedicated to studying the impacts of land-use on water quality and ecosystem function in caves and karst topography of the Ozark region.

Devil's Icebox and Hunter's caves are located in the karst topography of southern Boone County, MO. Karst terrain is characterized by soluble bedrock (typically limestone and dolomite), sink holes, and "losing" streams. The latter term refers to surface streams whose flow is diverted to groundwater which then flows through cracks and fissures in the bedrock and may form large cave passages over time. Both cave systems in this study have upper basins (Fig. 1) that are surface streams with predominant agricultural land-uses, primarily row cropping and pasture. At some point, these surface streams are diverted to the sub-surface and are the primary water source of the cave streams. In addition, the lower basins are characterized by sink hole areas that provide a direct, localized conduit for surface water to enter the caves; thus, this part of the drainage basin is referred to as internally drained. Regardless of whether the source of water is surface or internally drained, the cave water quality is directly related to the surface land-use activities. In karst terrain, groundwater is especially vulnerable to contamination resulting from surface land-use activities because of the direct and rapid hydrologic link between surface and ground water in these systems. Unlike the slower draining glaciated areas of the corn belt, surface water in karst areas is subject to less of the beneficial soil processes that may potentially reduce groundwater contamination.

Instrumentation for year-round monitoring of contaminants and basic water quality parameters have been established at the stream resurgence (i.e., cave entrances) for both Hunter's and the Devil's Icebox Caves. Runoff event samples are collected using automated samplers (Fig. 2) which can be programmed to collect samples after major rainfall events. In addition, grab samples are collected at regular intervals throughout the year. Cave stream flow at both sites is measured by the stream height which is then correlated to the stream flow. With this approach, we can make fairly accurate estimates of the total amount of contaminants transported through the cave systems. Year-round water quality monitoring will be conducted for a minimum of two years.

In Hunter's Cave, 12 sites along the cave stream have been established for assessing the presence and populations of the major aquatic invertebrate species. Assessments are conducting every 4-6 weeks throughout the year to understand how species composition and populations fluctuate over time. This data will also be useful for correlating contamination to observed changes in aquatic species. At the Devil's Icebox Cave, efforts are currently underway to collect and remove Pink Planaria from the cave in order to conduct basic behavioral studies on this endemic species. Future studies in the Icebox will also focus on a similar biological assessment to that being conducted at Hunters Cave, with an emphasis on estimating the Pink Planaria population.